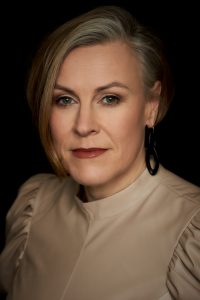 Returning from vocal studies in Munich Soprano Martina Prins has taken on some big repertoire roles. Touring with Opera2Days production of Ambroise Thomas’ Hamlet as Reine Gertrude, of which a DVD was released in the Fall of 2018, jumping in last minute for Aida for the Festival Classique summer 2019, Martina is onto a good start. Early spring 2020 is reserved for Nederlandse Reisopera’s Tour of ,Bruid te Koop!’, a Dutch version of Smetana’s Bartered Bride, in which she will perform Ludmila.

“born and raised in Amsterdam, I first took the ‘safe route’ of studying at the The Hague Royal Conservatory. It is actually rather silly to call such an institute a ‘conservatory’, since it is more of an ‘exploratory’. You do research as to how your voice, your body, your mind, your system works, how your brain copes with studying, what kind of music steals your heart and how you interact with your fellow musicians. I had the great chance of being selected for the Dutch National Opera Academy as well, where I made my first steps singing entire operaroles, and it gave me tons of information and how to go about getting through roles like that. It also opened my heart to Opera, that unique artform that combines acting and singing, and is both the most challenging, but also the most fun puzzle to solve.”

Martina studied voice in The Netherlands, with Alexander Oliver, Maria Acda-Maas and Diane Forlano. She took masterclasses with some of the greatest performers, such as Ks Brigitte Fassbaender, Harry Peeters, Tina Ruta, Anthony Legge, Graham Clarke and Rita Cullis. After graduating she moved to Germany, where she continued her studies privately with Prof Dennis M Heath and Oresta Cybriwsky. Currently Martina works with New York based vocal coach Ira Siff.

“for singers it’s all about ‘voice type’. Finding out what you are made to sing and play, as what role or in which oratorio or Lied you would be well cast, is basically your biggest challenge as a singer. Which part fits me like a glove? which part is too heavy, which one too light? which ones require too much agility, which are the ones that enhance the long line? which part taps on all registers, both vocally but also mentally, and brings out all of my talents? Casting people are less likely to ask me for the lovely , angelic parts, and I don’t mind, I love to get the chance to poor my heart out on the darker, more excentric, maternal or royal side of the feminine character scheme, hahaha!!” (laughs out loud)

A major part of Martina’s repertoire are works by Richard Wagner. During her studies she won the renowned Stipend from the Bayreuth Festival, and enjoyed great personal succes for her performance of Sieglinde in a semi-staged version of the 1st Act of Die Walküre conducted by Kenneth Montgomery, a role she recently reprised with conductor Jac van Steen. Her Wagner Repertoire also includes ‚Isolde’s Liebestod’, which she performed at the Rotterdam Operadagen, June 2007 in a staging by Neil Wallace, and in an pastiche opera production ,,Dr Miracle’s Last Illusion’’, which toured the Netherlands in 2017. She was invited to understudy the full role of Isolde with the Tiroler Festspiele conducted by Gustav Kuhn, and performed Freia in a location project ‘Rheingold on the Rhine’, taking place in a freight ship travelling down the river Rhine 2013. Highlight was her performance of Walküre sister Ortlinde at De Nederlandse Opera in their highly acclaimed Der Ring des Nibelungen 2014 by Pierre Audi, conducted by Hartmut Haenchen.

“it’s also about the people you get a chance to work with. They are colleagues, but also mentors. That is also what our work is about, developing, exploring, studying new parts all the time, it keeps your mind and heart active! And I am thankfull both for the people who are very critical at time -sometimes the raw thruth can hurt but also be a chance- as I am thankfull for the people who just showed me through sheer excitement or in a more pedagogical fashion. It’s all about colleagues that can be a ball of fire and positive energy, the lift a group of sixteen violins in an orchestra can give you, when they play their hearts out supporting your line, or when suddenly magic happens when you sing a duet. Those things are thrilling experiences!!”

“Martina Prins (Reine Gertrude) folded her voluminous soprano effortlessly into the overal ensemble and played her charachter so charmingly one would almost start to doubt the queens devious infidelity.” (NRC, Jan 18, Joep Chistenhusz)

“also part of the production was Martina Prins, an exceptional soprano, who sings both old music and Wagner, and showed off her sorceress mischief in a very skilful manor.” (Frankfurter Algemeine on ‘Alcione’, March 08, Lotte Thaler)

“… we’ll continue the path of the arts with the way Martina Prins performs mysteriously, but with a glorious voice Alban Berg’s ‘Die Nacht’ and ‘Die Nachtigall’, to top it all off with the Hallen aria from Tannhäuser reaching heavenly heights! Prins is definitely one of the winners of Fassbaenders Masterclass in Eppan.” (Tageblatt der Südtiroler – Bolzano – July 2008)

“very remarkable was the powerfull voice of Martina Prins, a beautiful soprano; her experience in singing Wagner was especially audible in her modest and taut performance of the Libera Me” (Gelderlander, May 2005)